GOOD MORNING, CLASS OF '64
Hay-Cutters
from The Way It Is: New & Selected Poems
William Stafford

Time tells them.
They go along touching
the grass, the feathery ends.
When it feels just so,
they start the mowing machine,
leaving the land its long windrows,
and air strokes the leaves dry.

Sometimes you begin to push;
you want to hurry the sun,
have the hours expand,
because clouds come.
Lightning looks out from their hearts.
You try to hope the clouds away.
"Some year we'll have perfect hay."

Another Day with Larry


When the hay was dry enough, we began raking it. We used a horse-drawn “buck rake”  or “buggy rake.” It was about 10 feet wide. The rear was made of spring steel tines, a half-circle shape, about 3 feet in diameter and 4 inches apart. When the rake was full, the operator stepped on a foot pedal that lifted the tines and dumped the hay. 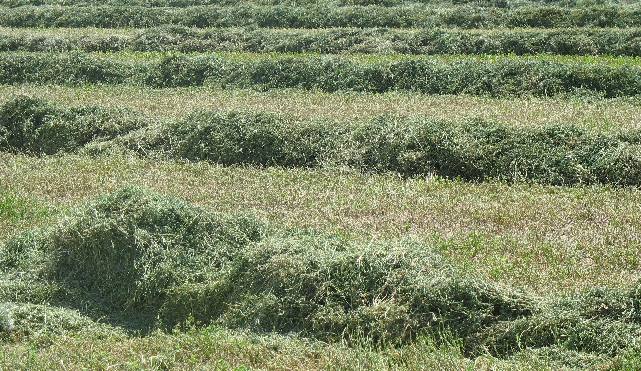 The hay was dumped in the same relative location all the way across the field, creating long lines of piled-up hay called hay mows (rhymes with now). Incidentally, the broken tines from the buggy rake were great in a blacksmith shop. They were high quality spring steel and could be used to make a lot of different tools. They were often used to make replacement teder forks. 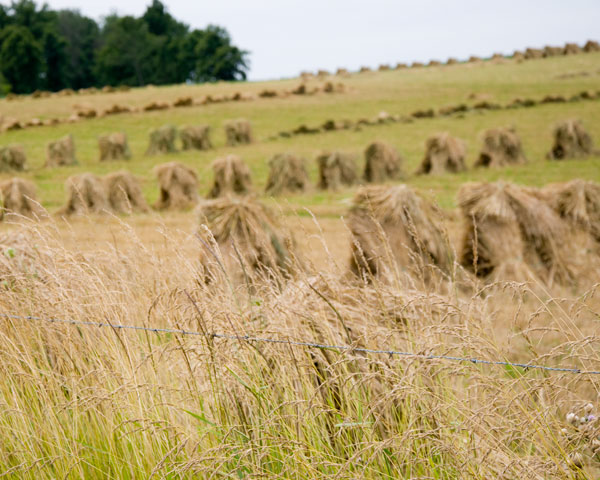 After the raking was started, the rest of us started making hay shocks. The shock was a neat, symmetrical mound of hay, about 4 feet in diameter and 4 feet tall. They were made by pulling the hay out of the mow, forming neat, flat bundles, and stacking them on top of each other.
When the shocks were completed, we either hauled them to the barn or to outdoor hay stacks. We usually had 5 or 6 outdoor hay stacks each year.
My first job with a horse was hauling hay shocks. The idea was to loop a rope or a chain under the bottom edge of the shock, all the way around. Then it was pulled with the horse. It’s a rather complicated task. The horse had to circle the shock, straighten his body in the direction desired, and then back up to the shock - rather tricky driving with an inexperienced horse or driver.
The horse I used, a dapple gray Percheron named Dan, was experienced. In fact, he knew much more than I did. All I needed to do was point him toward a shock. He would circle it, straighten out, and back up to the shock, all on his own. That was great, but the problem was that he had very definite opinions on how long it should take me to get the chain hooked. When he thought I had had enough time, he started for the stack. We turned over several shocks before he got me trained to his satisfaction.

In later years, I hauled with him and another horse simultaneously. I drove the other and hooked Dan’s shocks. He would take it to the stack and park it where the pitcher wanted it from voice commands. They would unhook him and point him out into the field. He would select a shock, position himself, and wait until I came to hook him up. He was a terrific horse. He taught me everything I know about horses. 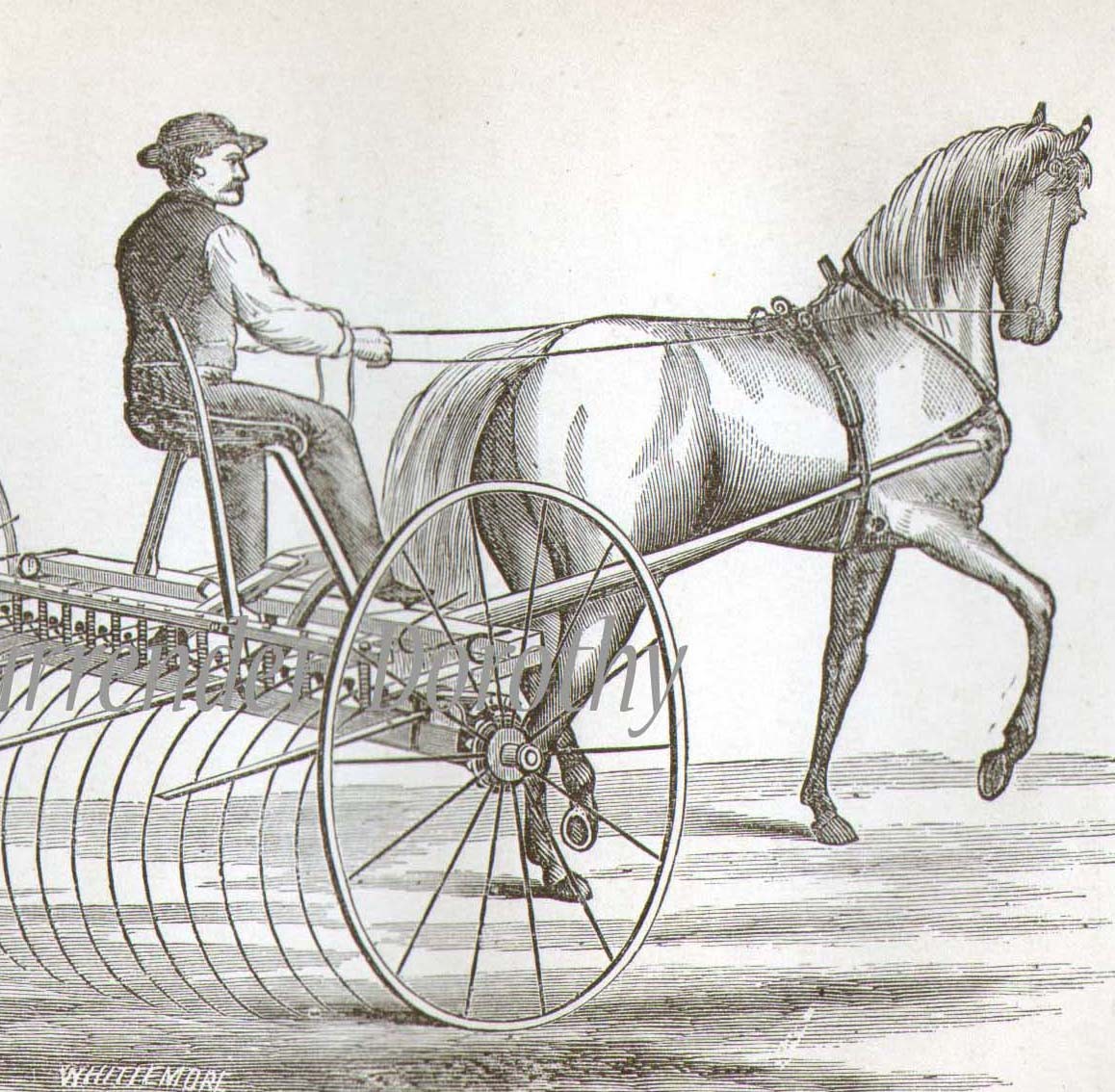 Cutting and Raking Hay with Horses

make hay while the sun shines
to do something while the situation
or conditions are right
http://idioms.thefreedictionary.com/Make+hay+while+the+sun+shines

Hundreds of years ago, it would take many days for farmers to cut, dry and gather hay. Today, it’s much easier to make hay because of our modern machinery and weather forecasting.

Since hay can be ruined easily if it gets too wet, medieval farmers had to take advantage of hot, dry, sunny weather to cut and gather hay. Thus, “make hay while the sun shines” was just a matter of common sense to them.

They eventually began to use the phrase generally to mean to take advantage of circumstances before the chance slips away.
See more at: http://wonderopolis.org/wonder/why-do-you-say-make-hay-while-the-sun-shines/#sthash.DmW3kBXa.dpuf
http://wonderopolis.org/wonder/why-do-you-say-make-hay-while-the-sun-shines/ 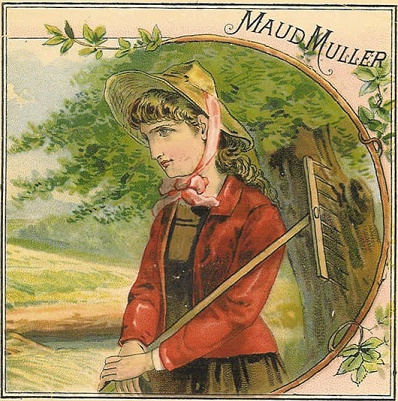 MAUD MULLER, on a summer's day,
Raked the meadows sweet with hay.

Beneath her torn hat glowed the wealth
Of simple beauty and rustic health.

Singing, she wrought, and her merry glee
The mock-bird echoed from his tree.

But, when she glanced to the far-off town,
White from its hill-slope looking down,

The sweet song died, and a vague unrest
And a nameless longing filled her breast--

A wish, that she hardly dared to own,
For something better than she had known.

The Judge rode slowly down the lane,
Smoothing his horse's chestnut mane.

He drew his bridle in the shade
Of the apple-trees, to greet the maid,

And ask a draught from the spring that flowed
Through the meadow across the road.

She stooped where the cool spring bubbled up,
And filled for him her small tin cup,

And blushed as she gave it, looking down
On her feet so bare, and her tattered gown.

"Thanks!" said the Judge, "a sweeter draught
From a fairer hand was never quaffed."

He spoke of the grass and flowers and trees,
Of the singing birds and the humming bees;

Then talked of the haying, and wondered whether
The cloud in the west would bring foul weather.

And Maud forgot her briar-torn gown,
And her graceful ankles bare and brown;

And listened, while a pleasant surprise
Looked from her long-lashed hazel eyes.

At last, like one who for delay
Seeks a vain excuse, he rode away,

Maud Muller looked and sighed: "Ah, me!
That I the Judge's bride might be!

"He would dress me up in silks so fine,
And praise and toast me at his wine.

"My father should wear a broadcloth coat;
My brother should sail a painted boat.

"I'd dress my mother so grand and gay,
And the baby should have a new toy each day.

"And I'd feed the hungry and clothe the poor,
And all should bless me who left our door."

The Judge looked back as he climbed the hill,
And saw Maud Muller standing still.

"A form more fair, a face more sweet,
Ne'er hath it been my lot to meet.

"And her modest answer and graceful air
Show her wise and good as she is fair.

"Would she were mine, and I to-day,
Like her, a harvester of hay:

"No doubtful balance of rights and wrongs,
Nor weary lawyers with endless tongues,

"But low of cattle, and song of birds,
And health, and quiet, and loving words."

But he thought of his sisters, proud and cold,
And his mother, vain of her rank and gold.

So, closing his heart, the Judge rode on,
And Maud was left in the field alone.

But the lawyers smiled that afternoon,
When he hummed in court an old love-tune;

And the young girl mused beside the well,
Till the rain on the unraked clover fell.

He wedded a wife of richest dower,
Who lived for fashion, as he for power.

Yet oft, in his marble hearth's bright glow,
He watched a picture come and go:

And sweet Maud Muller's hazel eyes
Looked out in their innocent surprise.

Oft when the wine in his glass was red,
He longed for the wayside well instead;

And closed his eyes on his garnished rooms,
To dream of meadows and clover-blooms.

And the proud man sighed, with a secret pain,
"Ah, that I were free again!

"Free as when I rode that day,
Where the barefoot maiden raked her hay."

She wedded a man unlearned and poor,
And many children played round her door.

But care and sorrow, and child-birth pain,
Left their traces on heart and brain.

And oft, when the summer sun shone hot
On the new-mown hay in the meadow lot,

And she heard the little spring brook fall
Over the roadside, through the wall,

In the shade of the apple-tree again
She saw a rider draw his rein,

And, gazing down with timid grace,
She felt his pleased eyes read her face.

Sometimes her narrow kitchen walls
Stretched away into stately halls;

The weary wheel to a spinnet turned,
The tallow candle an astral burned;

And for him who sat by the chimney lug,
Dozing and grumbling o'er pipe and mug,

A manly form at her side she saw,
And joy was duty and love was law.

Then she took up her burden of life again,
Saying only, "It might have been."

Alas for maiden, alas for Judge,
For rich repiner and household drudge!

God pity them both! and pity us all,
Who vainly the dreams of youth recall;

For of all sad words of tongue or pen,
The saddest are these: "It might have been!"

Ah, well! for us all some sweet hope lies
Deeply buried from human eyes;

And, in the hereafter, angels may
Roll the stone from its grave away! 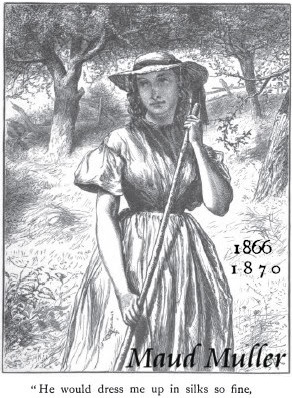