Good Morning, Class of '64
“Oh, Eeyore, you are wet!”
said Piglet, feeling him.
Eeyore shook himself,
and asked somebody to explain
to Piglet what happened when
you had been inside a river
for quite a long time
A.A. Milne

you gently along and
sometimes the rapids
come out of nowhere.
Emma Smith

Love is like a river flowing
through your heart.
I’ll bring the boat,
if you bring the bridge.
Jarod Kintz,
Love quotes for the ages.
And the ageless sages. 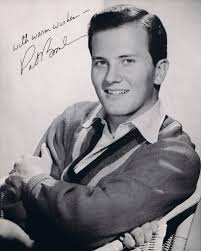 Pat Boone was a popular singing artist in our early growing years and into our teens. He sang some fast rocking tunes and some slower paced love songs. Most of the tunes that jumped were good, but his ballads of love rested easy on the ears. He could also whistle. Listen to Love Letters in the Sand. That's him.

He was also an actor and starred in several movies. Because of his Christian beliefs, he turned down an offer to star in a movie with Marilyn Monroe - would have been an interesting pairing. When filming April Love, he was asked to kiss his co-star, Shirley Jones, but before giving his co-star Shirley a smackaroo he got permission from Shirley (Foley), his wife. The kiss had to be all right with her.

He was a writer who penned several books for young people. Twixt Twelve and Twenty was a number one best seller in the fifties. It is interesting to learn that he wrote the lyrics for the instrumental theme song for the movie Exodus. He titled his lyrics This Land is Mine.

Pat Boone claims to be descended from the pioneer Daniel Boone. Richard Boone of Have Gun Will Travel is a cousin, as well as Randy Boone of The Virginian and Cimarron Strip. He also has a brother, Cecil Altman Boone, who made recordings under the name of Nick Todd instead of his own name. The record executives thought another Boone would be too confusing.

During his career, Pat Boone sold over 45 million albums and had 38 top 40 hits. In the late fifties he was the second biggest charting artist, behind Elvis Presley and ahead of Ricky Nelson. He is ranked number nine in Billboard's listing of the Top 100 Top 40 Artists of 1955-1995. His Billboard record still stands of spending 220 consecutive weeks on the charts with one or more songs each week.
Pat Boone Songs
http://en.wikipedia.org/wiki/Category:Pat_Boone_songs

From
To You
Walt Whitman

Whoever you are,
now I place my hand upon you,
that you be my poem,
I whisper with my lips close to your ear.
I have loved many women and men,
but I love none better than you.

April Love
Became a number-one hit
in December 1957.
In 1958, it was nominated for an
Academy Award for Best Music, Original Song
From a movie by the same name
starring Pat Boone.
http://en.wikipedia.org/wiki/April_Love_%28song%29
Pat Boone - 1957

She Tells Her Love While Half Asleep

She tells her love while half ,
In the dark hours,
With half words whispered low;
As earth stirs in her winter
And puts out grass and flowers
Despite the snow,
Despite the falling snow.

Arms have I, strong as the oak, for this occasion
Lips have I, to kiss thee, too, in friendly persuasion

O Mistress mine, where are you roaming?
O, stay and hear; your true love's coming,
That can sing both high and low:
Trip no further, pretty sweeting;
Journeys end in lovers meeting,
Every wise man's son doth know.

What is love? 'Tis not hereafter;
Present mirth hath present laughter;
What's to come is still unsure:
In delay there lies not plenty;
Then, come kiss me, sweet and twenty,
Youth's a stuff will not endure.

They were born exactly one year apart.
Pat was born on June 1, 1934 and
Cecil Altman Boone on June 1, 1935.
He recorded under the name "Nick Todd"
and had two hit records
called Plaything and At The Hop,
which reached #41 and #21
on the Billboard Hot 100 chart.
http://en.wikipedia.org/wiki/Nick_Todd
http://www.songfacts.com/detail.php?id=13120
At The Hop

The mingle with the river,
And the rivers with the ocean;
The winds of heaven mix forever,
With a sweet emotion;
Nothing in the world is single;
All things by a law divine
In one another's being mingle;--
Why not I with thine?
See! the mountains kiss high heaven,
And the waves clasp one another;
No sister would be forgiven,
If it disdained it's brother;
And the sunlight clasps the earth,
And the moonbeams kiss the sea;--
What are all these kissings worth,
If thou kiss not me?