David Ronald Bruce Pekrul
http://www.myhiddenvoice.com/themoonshinerunner.html
Deep in the thick of an woodland grove,
A man stands next to a pot-bellied stove,
A grizzled old man hiding out in this cove,
The moonshine is flowing again.
He heats the mash and squeezes the corn,
Distilling the liquid from evening ‘til morn’,
Just like his father, before he was born,
The moonshine is flowing again.

“I’ll take this booze and spread it around,
To the boys in the woods and the men in the town,
Don’t care if the ladies all wear a big frown,
The moonshine is flowing again.”

He loads up the trunk of his ’39 Chev,
He runs all the lights, even though they are red,
The revenue taxmen all want him for dead,
The moonshine is flowing again.

They're hot on his trail and there’s nowhere to run,
He heads down the highway and follows the sun,
The cops cut him down ‘cause he’s wearing a gun,
The moonshine is flowing again.

“I’ll take this booze and spread it around,
To the boys in the woods and the men in the town,
Don’t care if the ladies all wear a big frown,
The moonshine is flowing again.”

He lies all alone in an unmarked grave,
The cops shot him down ‘cause he wouldn’t behave,
The booze that they captured, they figured they’d save,
The moonshine is flowing again.

A voice is heard, coming up from the ground,
“My life is now over, to Hell I am bound,
Just leave me some liquor, where it can be found,”
The moonshine is flowing again.

“Now take this booze and spread it around,
To the boys in the woods and the men in the town,
Don’t care if the ladies all wear a big frown,
The moonshine is flowing again.”

Sometime before my birth, during World War II, a gentleman named Lester had a moonshine still on the farm. I know it was during the war because Lester gave Mom a large amount of sugar so she could can her fruit. He, of course, got it on the black market, but Mom really appreciated it.

Mom and Dad were both honest and conscientious about obeying the law but being able to can the food needed for their family had precedent over wartime sugar rationing. I believe the still was located near the head of Indian Run; that’s one of the few places on the farm with enough water to operate a still. I don’t think Dad ever worked the still, but he carried the product in a burlap bag to Valley Head each Saturday. Apricot brandy was made at least one time.

One Saturday, Dad carried the prearranged number of Mason jars of moonshine to Valley Head. He literally carried them because we didn’t have a car then. The still owner had a beer joint in Valley Head, and as Dad approached it, he saw a State Police car in front. Dad went around to the rear and went into the back room. When he got Lester’s attention, Lester brought the two State Policemen into the back room and gave each of them a quart jar of “shine.”

After they left, he told Dad that if he were ever stopped by the law while carrying the moonshine, he should just tell them who it belonged to. Dad said that he didn’t realize that Lester was so tight with the law.

Lester then explained exactly how tight he was with the law. He reminded Dad that he had a new still that year, one more than twice as large as the one he had used earlier. Lester had not had someone make the new still for him; he had exchanged the small one for a bigger one from the evidence room at the county court house. 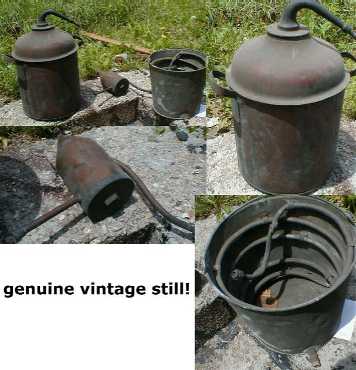 All confiscated stills were inventoried by number not by size. Like any successful businessman, he was simply trying to expand his business, aided and abetted by the members of the Randolph County Court!
An interesting sidelight of this is that for many years my cousin was the Clerk of the Circuit Court in Randolph County. I’m not sure if he was in the courthouse when this happened, or if he was party to it if he was there. 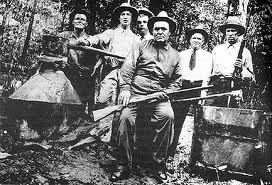 The entire courthouse crowd had a reputation for severely bending and sometimes breaking the law. Dad used to call them “that d--- crooked courthouse gang.” 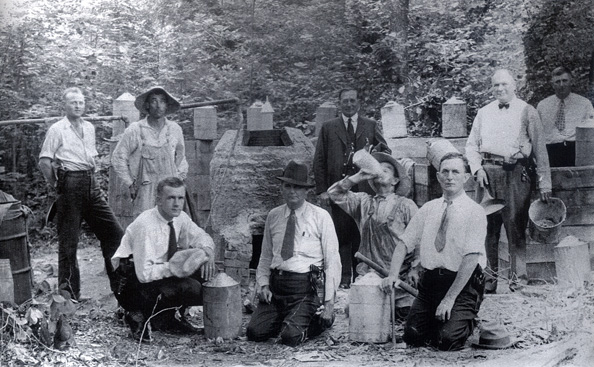 Many of them became rather wealthy from their “public service,” just as so many of our elected non-representatives do today.

White Lightning
Written by the rockabilly artist J. P. Richardson,
best known by his stage name,
The Big Bopper.
Released as a single in February 1959.
On April 13, 1959, Jones' version
became the first Number One
single of his career.
http://en.wikipedia.org/wiki/White_Lightning_%28George_Jones_song%29
White Lightning - George Jones - 1959 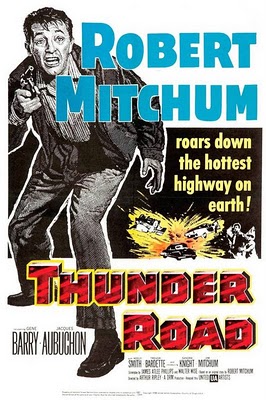 Thunder Road
Robert Mitchum
A black and white 1958 film
about running moonshine
in the mountains of Kentucky and
Tennessee in the late 1950s.
http://en.wikipedia.org/wiki/Thunder_Road_%28film%29
http://www.outofthepastblog.com/2010/04/thunder-road-1958.html
Thunder Road (1958) Car Scenes Part 1 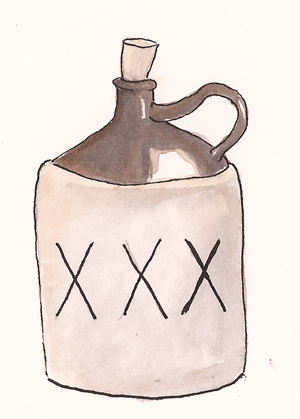 Moonshine
The name comes from the distillation process being done at night so as not to get caught distilling.
When shaken, if large bubbles form with a short duration
this indicates a higher alcohol content, while smaller bubbles that disappear more slowly
indicate lower alcohol content.
http://en.wikipedia.org/wiki/Moonshine
A Moonshine Joke
as told by Larry
A good old boy is walking down
the road carrying some
moonshine and a shotgun.
He happens to meet a city slicker.
The good old boy asks the city slicker
if he would care to try some "shine".
The city slicker tells him no,
he just doesn't care for any.
The good old boy points the gun at him
and tells him to drink.
Of course, the city slicker drinks.
When he finishes,
the good old boy says to him,
"Now, hold the gun on me."
Another Moonshine Joke
as told by Larry
A good old boy is walking through town
with some moonshine stuck in his boot,
hidden under his pant's leg,
and carrying a sachel.
"What's that under your pant's leg?"
he's asked by one of the townsfolk.
"That's my moonshine", he replies.
"There's nothing better for a snake bite."
"Well, what's that in the satchel?"
asks the curious townsfolk.
"That's my snake,"
said the good old boy.
Fun Facts about Moonshine
http://www.flask.com/7-fun-facts-you-didnt-know-about-moonshine/
A BRIEF HISTORY OF MOONSHINING
http://www.moonshiner28.com/moonshiner28_history.html
Moonshine Nicknames
http://www.vtpublichistory.org/sites/MoonshineAppalachia/moonshine-nicknames/
Hootch, Shine, Booze, Kickapoo Joy Juice,
Corn Liquor, Mountain Dew, white lightning, Hillbilly Pop
Good Old Mountain Dew
The terms "mountain dew" and "moonshine"
are thought to have come
to the United States from Ireland.
Over time, artists have added new verses,
but the tune has remained the same
since it was first written in the 1920s.
http://en.wikipedia.org/wiki/Good_Old_Mountain_Dew
Good Old Mountain Dew - Grandpa Jones
Oh they call it that ole mountain dew
and them that refuse it are few.
I'll shut up my mug if you fill up my jug
with some good ole mountain dew.
How to Make Apple Pie Moonshine
http://www.moonshinelife.com/resources/recipes/apple-pie-moonshine/ 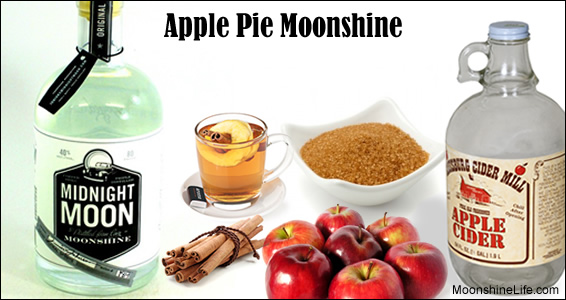 To make Apple Pie Moonshine at home, you obviously need Moonshine! This could be purchased from a legal moonshine distiller, or you can make it yourself (Click here to learn how).

Apple Pie Moonshine
Dooley
"Dooley" is a song performed by The Dillards
on The Andy Griffith Show episodes
The Darlings Are Coming
and
Mountain Wedding.
http://mayberry.wikia.com/wiki/%22Dooley%22
Dooley

Verse 1
Dooley was a good old man, he lived below the mill
Dooley had two daughters and a forty-gallon still
One gal watched the boiler, the other watched the spout
And mama corked the bottles and old Dooley fetched 'em out

Chorus
Dooley slippin' up the holler
Dooley tryin' to make a dollar
Dooley, give me a swaller
And I'll pay you back someday

Verse 2
The revenuers came for him, a-slippin' through the woods
Dooley kept behind them all and never lost his goods
Dooley was a trader when into town he'd come
Sugar by the bushel and molasses by the drum

Verse 3
I remember very well the day old Dooley died
The women folk weren't sorry and the men stood 'round and cried
Now Dooley's on the mountain, he lies there all alone
They put a jug beside him and a barrel for his stone
The Andy Griffith Show
The Darlings
Country Music Channel

I’ve been a moonshiner goin’ on seventeen year.
I spent all my money on whiskey and beer.
I’ll go to some holler and set up my still,
And sell you a gallon for a two-dollar bill.
“The Kentucky Moonshiner” (traditional)
http://www.kentuckymonthly.com/culture/%E2%80%9Cif-moonshine-don%E2%80%99t-kill-me-%E2%80%A6%E2%80%9D/ 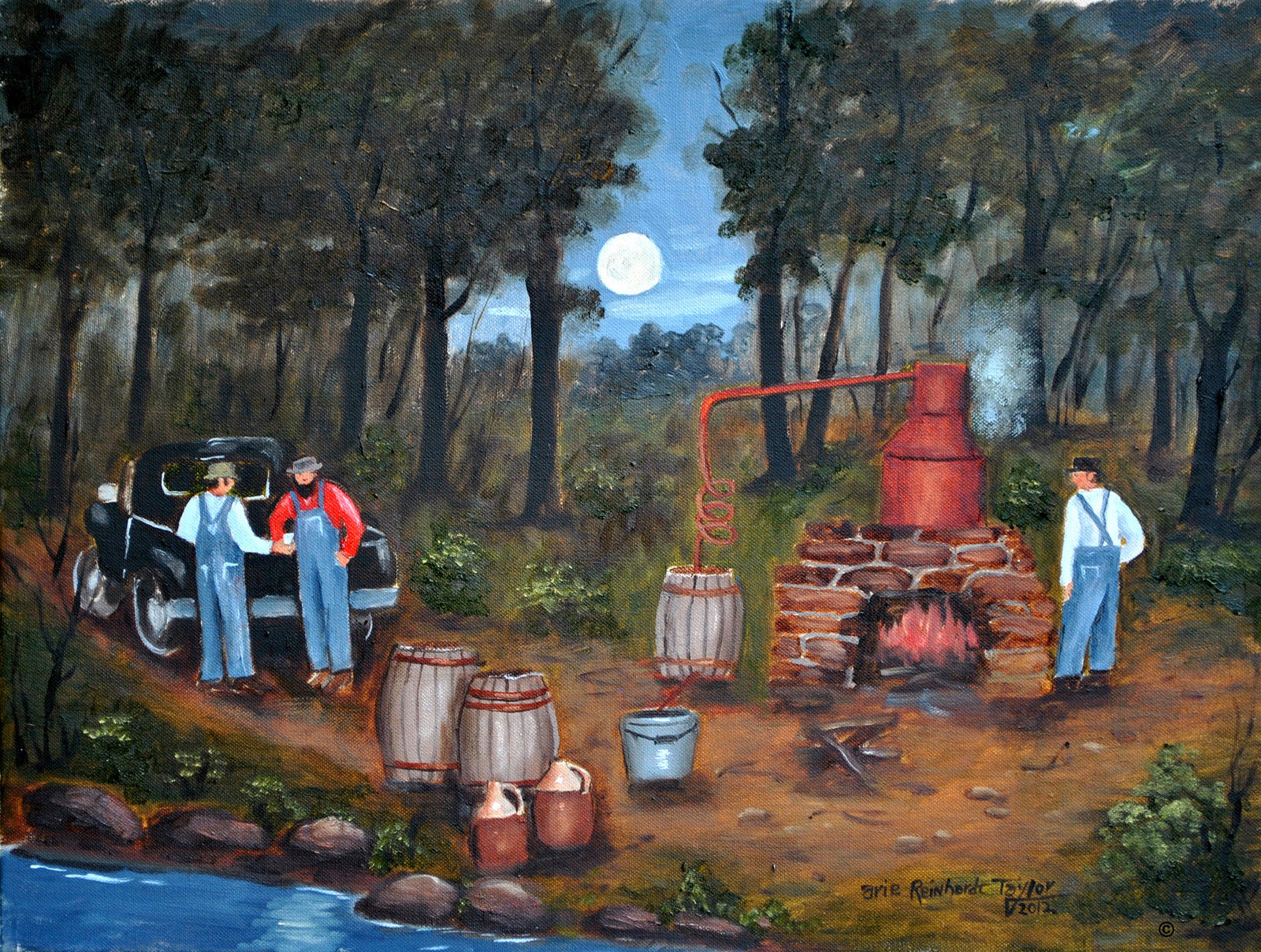